Counterfactual Commerce: "What Ifs" and Advertising

I’m grateful to my counterfactual history colleague in Germany, Heiko Henning, for alerting me to a great example of how counterfactuals have been used in advertising.

Apparently, the Coors Company decided in 1979 to use the ever-popular Napoleon Bonaparte to sell – what else, beer? 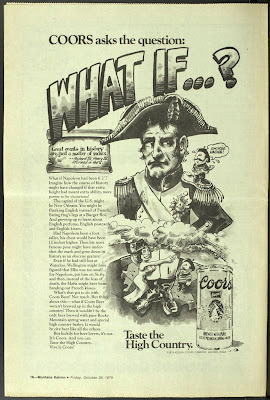 Featuring a comic-book style illustration of the French general accompanied by a baguette-slinging Frenchman, the ad includes a lot of counterfactual riffing about how history would have been different – for example, “if Napoleon had been 6’ 2” [tall]” then his “extra ability”  might have led him to conquer the United States.  Then the “capital of the U. S. might be New Orleans” and we would all be eating “frogs legs at…Burger Roi.”

The ad eventually gets to the main point, which is to ask, “what if Coors weren’t brewed up in the high country?”  Predictably, the ad goes on to answer the question with the obvious reply: “it would be city beer like all the others.” Fortunately, the ad concludes, “it’s not.  It’s Coors….Vive le Coors!”

It’s unclear why the beer company went with this line of advertising.  (Probably one of the advertising team’s members was a counterfactual history buff).  In any case, it seems to have been a one-off instance.

And yet, as I will be showing in my forthcoming book, “what ifs” have been used to market all kinds of products since the late 19th century.  I’ll save all the examples I’ve collected  for the book, but one sample (below) is worth noting.

It employed Pascal’s famous concept of Cleopatra’s Nose to sell lines of credit at a Pittsburgh bank. 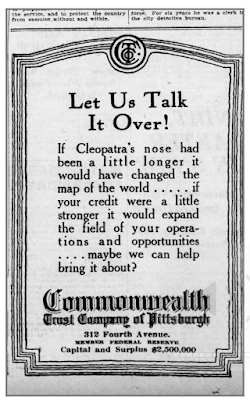 It’s a gimmick, to be sure, but the popularity of counterfactuals in advertising makes clear that “what ifs” have long been part of our western cultural environment.