More "Close Call Counterfactuals" from the Sacking of the U. S. Capitol: John Podhoretz's Indictment of Donald Trump

I’ve posted before on how recent commentators have used counterfactuals to interpret the significance of the January 6th sacking of the U. S. Capitol. 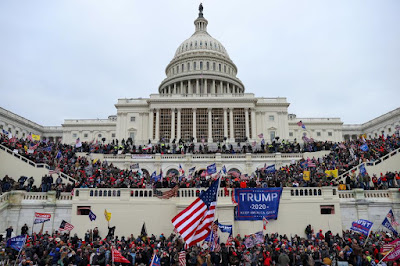 Podhoretz makes his argument with a variety of causal and close call counterfactuals.  Prefacing his “what ifs” with the observation, “this is what we learned today,” he writes:

"We learned that on January 6, Mitt Romney was coming down a hallway. In less than a minute, he would have encountered members of the mob who had breached the Capitol. The heroic Sgt. Eugene Goodman, who was cleverly guiding the rioters away from the Senate chamber, quickly directed the former Republican nominee for president to run in the other direction. Romney ran. Had he not, it is all but certain that he—the signature enemy of all things MAGA, the man who had voted to convict Donald Trump in the first impeachment trial early last year, and a sitting senator from Utah for whom many of those in the mob likely voted for president a little more than eight years ago—would have been tased and then beaten to death by the insurrectionists.”

What we knew before we know even more chillingly now…is that the January 6 rioters had blood in their eyes and blood hunger in their voices.

And they would not have been [at the Capitol] —not a one of them, not on January 6, and not ever—if Donald Trump had not wished it so.

One minor quibble: the Passover song, Dayenu, praises God for doing even more than he had to for the benefit of the Israelites – with the refrain suggesting that the latter would have been content had God stopped even after the first miracle – but he surpassed himself by doing even more.  Strictly speaking, a nightmare version of Dayenu would be a scenario in which an evildoer does not content himself with a single crime because it does not go far enough and continues to pile on more misdeeds (to the cheers of his minions who sing a song of praise in gratitude to the evildoer for not stopping merely at one crime but going further).  From their perspective, the evildoer's actions constitute a “close call counterfactual” -- one that raises the possibility that the evildoer might not have been able to save his supporters from whatever threat they imagined, but ultimately did, thanks to his willingess to commit additional crimes.

Come to think of it, there may be many MAGA-ists who view Trump precisely in these terms.