Counterfactuals and the Capitol Coup: Using “What Ifs” to Make Sense of January 6th, 2021

I’ve said for some time that counterfactuals are often used to interpret and determine the meaning of historical events.  In fact, my forthcoming book empirically shows that this has been the case since Antiquity.

A vivid case of this reality is provided by the flood of responses to the Donald Trump’s abortive coup attempt at the U. S. Capitol.    There’s been no shortage of reactions to this awful event, but it’s striking how many of them have employed counterfactual reasoning and explored “what ifs.” 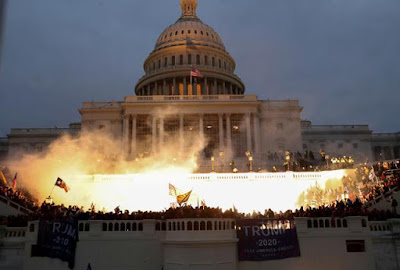 Commentators have used many different types of counterfactuals:

Consider Juan Williams’ use of “close call counterfactuals” in his Hill essay, “What If the Coup Had Succeeded?" As he writes: "What if...they had taken a senator hostage? What if they had kidnapped Vice President Pence? Think about it. Then Congress could not have certified President-elect Joe Biden’s election victory.That would have extended President Trump’s control of the White House — and the military — possibly past Inauguration Day until the radicals relented."

Consider also Emma Brocke’s “missed opportunity counterfactual” in the title of her Guardian essay,  “We should have been ready for it, but the spectacle at the Capitol came as a shock.”  As she hypothesizes, “It can’t happen here” is a phrase that, even as it was used in conjunction with darker warnings about Trump, betrayed a bedrock faith in American democracy that overlooks its savage foundations. The white supremacist project…should at least have raised as a possibility a white mob storming the government at the behest of a racist president.

Still other commentators have used “substitution counterfactuals” to point out that if the rioters had been people of color, the response would have been very different.  As The Philadelphia Inquirer’s Jenice Armstrong wrote: “Had they been Black, blood would have flowed down those white steps. Authorities would have tear-gassed dissenters in droves. They would have been shot with rubber bullets before they even made it inside one of the nation’s most important buildings. African Americans would have been rounded up and taken away by the busloads, like they were last summer during Black Lives Matter protests.”

Someone could easily write a more thorough analysis of the great many “what ifs” that have been posed in the wake of January 6th.  (I’d do it myself if I weren’t in the midst of researching the countless counterfactuals that were floated about World War I, both during and after the conflict).

But the main point should be clear: we can only make sense of what happened in the past by being aware of what might have happened.

Unknown said…
https://zimnative.com/blogs/historical-sites-and-ancient-ruins
March 26, 2021 at 7:30 AM