One of the benefits of my long deferred decision to subscribe to the London Review of Books is that I recently came across an extended counterfactual reflection from a few years back on the nuclear destruction of Berlin by historian of science Steven Shapin.  Actually, it’s more of a meditation of what would have happened had Great Britain under the leadership of Winston Churchill decided to invest more resources in the developing of the atom bomb during World War II. 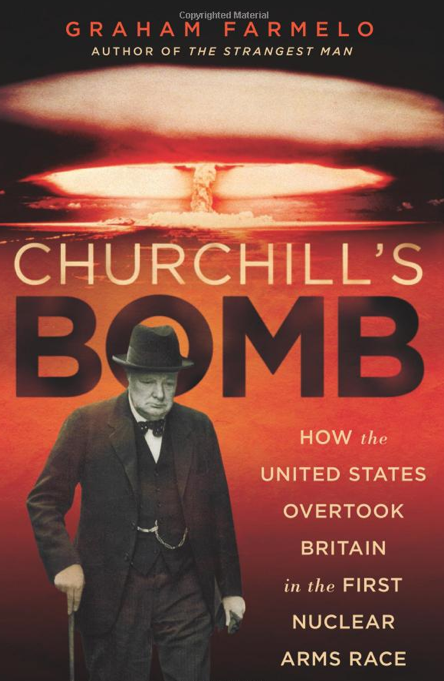 Shapin’s reflections appeared in his review of Graham Farmelo’s Churchill’s Bomb: A Hidden History of Science, War and Politics.  What I found most interesting – and indeed significant – was that Shapin begins his review of the book with a counterfactual history of the world as it might have been – had England developed the bomb – as method of appreciating the significance of Farmelo’s book.
The review begins as follows:
“Winston Churchill’s decision to drop the world’s first atomic bomb on Berlin on 1 July 1947 wasn’t a difficult one. The war hadn’t been going well since the landings in the Pas de Calais in May 1946 were thrown back with terrible losses – a failure that had much to do with the amount of treasure and materiel that had been diverted to Britain’s nuclear weapons programme. The Americans remained preoccupied in the Pacific, still wary of the slaughter that would surely attend an invasion of the Japanese home islands, and it wasn’t likely that another landing on the Atlantic coast of Europe could be mounted for several years. British and Canadian carpet-bombing of German cities continued, but ever since the Russians had been dealt an almost fatal blow by the capture of Moscow in September 1941, the Nazis had been able to shift military production out of range of Allied bombers and harden the Atlantic defences. The alternative to using the Bomb on Berlin would be more V-3 rockets falling on London and stalemate in the west, a thought too dreadful to contemplate. As Churchill foresaw, the Bomb instantly decapitated the Nazi leadership, and General von Kleist, the commander of the remaining German forces in the west, offered unconditional surrender. Britain’s Bomb won the war.”
“Producing the Bomb had cost Britain dear, ever since Churchill decided early in 1942 to go ahead with the massive project on the basis of the reports of the MAUD Committee and secured the vital collaboration of the Canadians in uranium isotope separation using the gaseous diffusion method. He had directed British scientists not to tell the Americans about calculations done in Birmingham early in 1940 by the émigré physicists Otto Frisch and Rudolf Peierls, which established that no more than a kilogram of fissionable U-235 was required for a bomb. American scientists, like the Germans, who also believed that tons might be needed, had not gone ahead with their proposed Cambridge Project, named after the Harvard and MIT affiliations of its leading figures. The Americans had concluded that it would be impossible to produce so much U-235 in time for a weapon to be used in this war, so in June 1947 Britain emerged as the world’s only nuclear power, and the gun-method uranium Bomb – nicknamed Fat Man (after the prime minister) – was successfully tested in Newfoundland. The British Bomb had seriously strained the alliance with the Americans, but there was no more a ‘special relationship’ with the US than there was with France. Britain had entered the war as a great imperial power, and Churchill was determined that it should emerge from it at least as great, a benign world policeman.”
“As it turned out, however, Britain’s use of the Bomb on Germany had the opposite effect. Like Aesop’s fable of the frog trying to become an ox, Britain puffed itself up until it burst. It could neither preserve its empire nor command the resources to sustain a superpower role, and historians now write fanciful ‘what if?’ stories envisaging a world in which the Americans were the first to develop the Bomb. They imagine what might have happened had Britain not implemented an open-arms policy towards émigré Jewish scientists and had Enrico Fermi gone to the US instead of Britain, where he so effectively joined his theoretical and experimental talents to those of Frisch, Peierls and dozens of other escapees in the massive and spectacularly successful Edgbaston Project. If all those things really had happened, the fantasists suggest, the Americans might have built the Bomb even sooner than the British did, given their vast industrial capabilities. They might have pursued a wide range of ways of producing U-235 and plutonium, even the electromagnetic separation techniques that the British-Canadian project had set aside because of their enormous expense. What if the US had become the world’s first nuclear power as early as the summer of 1946, then used its first two bombs on Kobe and Nagasaki, and its next two on Vladivostok and Moscow, since the Soviets had repulsed the Germans at Moscow and were threatening to dominate half of Europe? What, then, would Britain’s fate have been in the following decades? What if, unencumbered by the impossible demands of remaining a great power, Britain had not so disastrously attempted to retain its empire and had instead enthusiastically embraced a resurgent federal Europe? What if Britain had devoted huge resources to help reconstruct a still radioactive Soviet Union and formed a peaceful Atlantic-to-the-Urals ‘Eurovision’ partnership ranged against the rampant and dangerous American superpower? What if America, as the world’s sole nuclear state, was itself about to be destroyed by its own vaulting ambition?”
“Things didn’t happen that way, but they could have. Counterfactual history seems so implausible because our minds tend to drift from knowing the way things turned out to the assumption that that’s the way they had to turn out, but it prompts us nevertheless to think about the fragile interconnections of events, structures and personalities. Imagining a world in which Britain produced its own nuclear weapons during the war makes you consider the opportunity costs of things that didn’t happen because certain other things did: for example, the resources unavailable for assembling a Continental invasion force because they were devoted to a nuclear programme, and the political implications of things that might have happened if Britain had made its own Bomb, not least the effect on postwar relations with the United States.”

What a wonderfully provocative way to begin a book review!  Shapin’s attention to detail is impressive and his understanding of the utility of counterfactuals is spot-on.

That said, there are a few glitches.  First, he violates the “minimal rewrite rule” (to wit: change as little as possible to the historical record after your initial point of divergence) by adding a second counterfactual with the Germans’ capture of Moscow in September 1941.  (How this transpires is left unexplained).  Presumably, British panic at the USSR’s near-defeat is what sparks their move to develop the atom bomb.

But in reality, a near Soviet defeat might very well have led the UK to throw in the towel against the Nazis; with the USSR essentially out of the fight and the US not yet in it, England’s will to fight would have flagged.  This was Hitler’s strategy all along, of course, and one can imagine the separate peace camp in England pushing for an end to hostilities.

This is why Shapin’s conclusion that the British would have ultimately nuked Berlin (though not til 1947) does not convince as much as the hypothetical scenario of a German army victory in the Battle of the Bulge leading to this apocalyptic outcome.  (Click HERE, for a recent post on this topic).

Two and a half cheers, though, for Steven Shapin for adding further legitimacy to allohistorical speculation in academic writing.

Taff Simon said…
"had England developed the bomb" , "But in reality, a near Soviet defeat might very well have led the UK to throw in the towel against the Nazis; with the USSR essentially out of the fight and the US not yet in it, England’s will to fight would have flagged" England is not the UK. One would not substitute Wales, Scotland or Northern Ireland for the UK but for some reason England is fine. Perhaps the non-English parts of the UK never participated in WW2? It may seem a trivial point but when one hears this repeated time and time again, it does become something of a bore.
February 16, 2015 at 6:00 AM