Today Yahoo News reported an intriguing story with tantalizing counterfactual possibilities, only to leave them blowing in the wind. 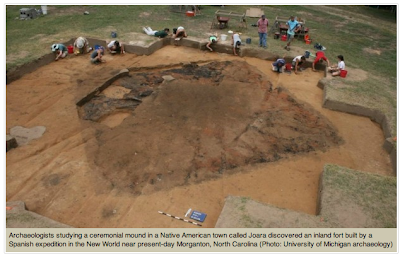 Archaeologists in North Carolina have just uncovered remnants of a long lost Spanish fort, whose origins date back to the year 1567, some forty years before the first permanent British settlement at Jamestown.

The story goes on to note:

"The settlement around Fort San Juan was occupied for less than two years and it met arather bloody end — likely brought on by the Spaniards' botched bartering for food and their sexual transgressions with Native American women. But the short-lived fort's traces serve as a reminder of how different U.S. history might have been if Spain had been more successful in its early colonial campaigns."

Well, yes, it is such a reminder....But how would American history have been different?  No one expects such a teaser to be fully answered in such a short story.   But after asking the question, the report devotes no further attention to the "what if?" premise whatsoever.

Of course, had the fort been successfully defended, and had a more substantial Spanish presence developed in the Northeast and Mid-Atlantic, any number of possibilities come to mind: a Catholic instead of Protestant North America.  Fierce clashes between the Spanish, Dutch, British, and French. An earlier independence movement against Spanish rule....